Why farmers are diversifying into insect farming

Beta Buzz, a publication for the insect farming industry, was originally launched by Beta Bugs Ltd in November 2021. The innovative start-up company based at Roslin Innovation Centre strives to shine a light on the ever-growing insect farming industry, and provides a solution to addressing the ever-growing need for regional production of protein and other feed ingredients. 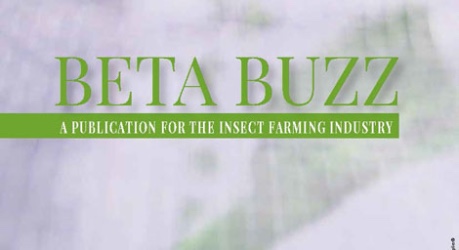 Now more than ever, it is important for the insect-farming industry to step up and scale-up – a feat which is largely possible through new market entrants such as farmers and entrepreneurs setting up their own insect farming operations.

There are a range of production options, from small, on-farm units to units that are as large as a farm in its entirety. By producing protein locally using locally derived materials, insect farming provides perfect opportunities for farmers wanting to use insect protein directly in their feed, or to sell it on to feed manufacturers.


World events in the past couple of years, especially COVID-19 and the Ukrainian war, have highlighted that the agri-food supply chain, which puts food on our tables, is prone to disruption and needs to be reinforced.

The same world events have put the UK farming base under significant pressure as animal feed ingredients become more scare. In addition to this, there is greater demand for animal protein due to the rise in the world population and increased sustainable food production targets set by the European Union.

Retailers are also increasingly signing up to science-based targets and, as they add accountability and credibility, are raising awareness and working more closely with their farmers and suppliers. As a result, farmers are seriously considering farming insects as a means of generating revenue, reducing their use of soya in animal feed, and localising their protein production.

Now is an exceptionally good time to farm insects – as shown in Beta Buzz #2 as there is more off-the-shelf insect farming equipment and know-how becoming available from well-known suppliers, making it easier to farm insects. By joining in at this moment, farmers are able to leverage a local, yet global, opportunity and be part of one of the world’s fastest growing industries, estimated to be worth US$1 billion as of writing.

When it comes to diversification, insect farming equipment providers give existing farmers the means to produce their own protein on-farm using on-farm surplus heat, space, and energy they have available.

Insects such as Black Soldier Fly Larvae can be reared at high densities, meaning tonnes of protein can be produced from a relatively small footprint, reducing feed ration costs at small-scale. As a result, the best way for farmers to leverage insect farming is to become an insect farmer themselves. By working with these established technology and egg or baby larvae suppliers, farmers can now produce Black Soldier Fly larvae at a range of scales – be it small-scale systems (12 tonne of live larvae/year) that produce larvae for on-farm usage or by supplying neighboring farms, or large-scale facilities (1000+ tonne of insect meal/year) that will supply animal feed manufacturers.

Both these routes allow farmers to diversify their operations in a low-carbon fashion. For those who want to establish large-scale production, the diversification opportunity is similar to setting up large-scale animal production. In this case, farmers target a scale of production in the thousands of tonnes/year, with the resulting insect protein and fat being supplied to feed manufacturers in the livestock, aqua and pet sectors to generate revenue.

Alternatively, the protein is used directly within large-scale animal production operations, especially if a feed mill is available on site. If on-farm production is not possible or desired, farmers can still use insects within their feeding regime by working with local suppliers of insect protein.

Furthermore, farmers can use agricultural product that has not been taken up by the supply chain as a feed for growing black soldier fly larvae on, turning a potential waste stream into a circular protein source.

Lastly, the frass (insect excreta) is rich in Nitrogen, Phosphorus and Potassium, meaning it can be used as an on-farm fertilizer to reduce fertilizer costs or sold on to create a further revenue stream.

Beta Bugs Ltd, developer and distributor of insect genetics, recognised the need for such a publication that would collate and bring the insect farming industry together. The first issue of Beta Buzz had an overwhelming response and was welcomed by the insect farming and agri-food industry, being hailed as a valuable resource for anyone involved/wanting to get involved in the sector.

Following on from this response, Beta Buzz #2 was created to help bridge the gap between businesses and customers struggling to find the required and most up to date information all in one place so taking into account the audience, Beta Buzz has included articles and perspectives on the sector, in line with the publications aim of making the industry more open and communicative. Alongside this, the industry-first technology and service providers showcase features a range of new companies and technologies which help set up Black Soldier Fly farms.

“…it is very exciting to see insect farming become more mainstream and widely acknowledged as evidenced by the talks, discussions and technology showcases at leading agricultural trade shows such as VIV Europe and Eurotier. In parallel, equipment suppliers from the pig and poultry industry are using their expertise to develop new products for the insect farming sector.”

Beta Bugs Ltd are an insect genetics company developing and distributing black soldier fly breeds to the insect farming sector. Founded in 2017 by Thomas Farrugia, the company is based at the Easter Bush Campus, a world-leading agri-food research, work, and study environment, just outside of Edinburgh, where it works on unlocking and disseminating the full genetic potential of insect farming.