Roslin Technologies, a biotech company based in the Midlothian Science Zone, is a joint venture between the University of Edinburgh and two investment and business development partners. It works to solve global challenges in agricultural technology (agtech) and animal health. 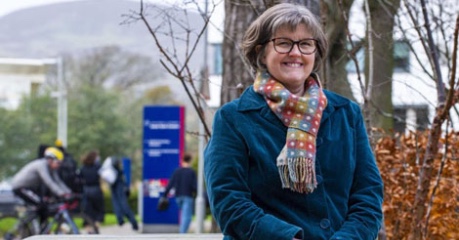 Her achievements prior to joining the firm include managing scientific programmes in academia supported by funding of more than Ł13 million – and inventing the small redworm diagnostic, marketed by Austin Davis Biologics. She is also an honorary professor at the Royal (Dick) School of Veterinary Studies.


The role of Roslin Technologies, based at Roslin Innovation Centre is to be a conduit between great science and the global market, and much of Prof. Matthews' time is spent looking at the great opportunities, and at innovations coming out of the University of Edinburgh and Roslin Institute in particular. That science can be in a wide range of subjects: genetics, gene editing, infectious disease, to name but a few.

The company looks to match up those innovations to the needs of end users and to find where the science can help plug gaps in the market. For any number of the issues facing the agricultural and veterinary sectors at the moment, whether that's related to disease, efficiency, or new ways to get food to the global population, Prof. Matthews' job is to mine the science that will help provide the solution.

The business launched a Ł50m capital raise in July and recently announced that it was expanding its executive team, saying it’s an “exciting time” to be at Roslin Tech. Being at a young company is always an exciting time; things are currently moving very fast and the energy is palpable. It was only three years ago that they started up with just Ł10m and an agreement that allowed them to help commercialise the amazing science and technology that’s being developed around the University of Edinburgh's Easter Bush Campus.

It all started when a group of investors saw the potential in Scotland's Agtech expertise – it is worth pointing out that Scotland should be really proud of being a world leader in this area. And the reason why it’s exciting now is that the thesis has been proved right. Roslin Tech are successfully developing the technology; engaging with the market who are interested in what they are doing and attracting interest from investors from all over the world.

"As a fast-growing business, we are bringing in new talent rapidly, adding more capacity into our executive and across the company as a whole. One of the key new roles we’re looking to fill at the moment is an insect technologist – not surprisingly in a technology company, these roles are as key as those of the people running the company."

Roslin Tech is a streamlined operation, so the changes that were needed for Covid were straightforward. Whilst their breeding programmes work continued, some activities were put on pause; many staff were able to work from home, but of course with scientists there are tasks and research activities that need specialist equipment. For example, the work they are undertaking with stem cells – the cells from which they are able to build any cell that makes up an animal's body – has to be done by skilled scientists in a laboratory. Staff went back into the laboratory as quickly as they could but with new protocols about hygiene and social distancing.

"I feel we are in safe hands at our companys' HQ in the wonderful Roslin Innovation Centre."

Fortunately, Roslin Technologies has now caught up and coped with the unprecedented pandemic very well – many of their scientific partners, portfolio companies and current and potential investors are dotted around the world so work normally takes place remotely. And during the pandemic, they managed to take on quite a few new hires, including someone to head up their insect genetic nucleus.

Roslin Technologies has said the partnership between science and industry is central to its strategy and business plans – while sustainability is key to their customer base and the investment community. Their targets are key sustainability targets, and how they get there is through sustainable processes. There is a lot of talk about sustainability these days, and often it seems companies try to shoehorn their business under that heading. Prof. Matthews thinks they might be unusual in that the very essence of what they are doing is about sustainability – their key overall task is to make the production of protein more efficient.

There is a shortage of food in the world today, and with the population growing that’s only going to get worse; Roslin Tech help the agriculture sector be more efficient, using diagnostics, vaccines and treatments for animals to make for healthier and happier livestock. Prof. Matthews is particularly proud of the work the company is doing to create a diagnostic to help tackle trypanosomosis, which has a major impact on the livelihoods of livestock keepers across Africa and South America.

But that's just the tip of the iceberg – their stem cell technology means that they can help companies create meat – “cultured meat” – but without any animals, opening up huge potential for those who might for ethical reasons want to avoid meat derived directly from animals. Roslin Tech's recent investment in insect technology is with a partner who can produce vast amounts of protein efficiently and at the same time in the process, fertiliser, all from recycling food waste. By being more efficient, this obviously means less waste, lower emissions and a healthier planet.

With Brexit looming, and as an internationally focused company that holds much value in diversity, Roslin Tech are keen to ensure that any barriers to working with them are kept to a minimum. The main areas of concern would be in recruitment – they want to be able to take on the best-in-class people from wherever they are. The company has always looked far and wide for the best talent – their senior geneticist came to us from Chile via New Zealand and South Africa, and other colleagues come from across the EU and China. Another area of concern is that scientists with whom they work with have relied in the past on the EU funding programmes, but the company has strategically adapted by expanding their funding portfolio to UK and non-EU based streams, and are well-placed to exploit these new opportunities.

Professor Matthews was always keen to pursue a career in science. The two things she loved in childhood, and consequently during school time, were science and animals.

"I was extremely privileged to be able to attend vet school, and while there, I realised I might have a wider impact through research into animal diseases, rather than working as a practitioner."

She was truly inspired by the fantastic veterinary research ethos at the Glasgow School in the 1980s, which had a big impact on her. She was taught by some of the leading veterinary scientists of their generation, especially in infectious disease, and did a short locum in practice after her degree. From there she went straight into a PhD, with her academic expertise focusing on worm vaccines and diagnostic tests. She said that while most people have a healthy aversion to these creatures, by studying them we can tackle some of the most debilitating and lethal diseases animals.

Her career trajectory accelerated when she got her first lectureship at the (relatively young) age of 24 at Glasgow Vet School. After that she moved to the Liverpool Vet School, whilst her husband, another parasitologist, was working in Manchester at the time. Prof. Matthews reflected fondly on the role, explaining she was able to combine research with practice at the Liverpool school’s world-renowned equine hospital. Her research there developed to try to tackle a worm that was emerging as the cause of severe illness in horses around the world and in which drug resistance was becoming a big problem. She invented and since commercialised a test based on that early work.

Professor Matthews and her husband came to Edinburgh in 2004. She was very lucky to be able to continue her research on parasites, looking at applied areas such as tackling worm drug resistance and developing vaccines. Latterly she was head of a big EU programme and it was during that time that she became more inspired by the translational aspects of science. What fascinated her was how to address the gap between what science can create and what the agtech sector needs. So when the opportunity came up at Roslin Tech to do that very job, she made the transition.

When asked about what should be done to address the under-representation of women in science, technology, engineering and mathematics careers, Prof. Matthews says there has to be a bottom-up and top-down approach to this, and the responsibility falls in part on women who are already in senior roles. Women need to be engaged in mentoring other women to become scientists; she has taken this role seriously over the years.

Another issue is to recognise the breaks that women might take in their careers when they have children, and unfortunately that often happens to coincide with the crunch time in a scientist’s career when they try to move from temporary to permanent employment. In some of the work, she is trying to help address this and mitigate the impact that can have on individual progress.

ProfessorMatthews sees science is a long-term intensive business. For those products that are now just hitting the market, for example their cultured meat proposition, she sees Roslin Tech's technology being a gold standard in this area by that time. She is really excited to see the uptake in their insect business and expect this protein source to be much more widely used in just a couple of years. She also expects the company will have key partnerships exploiting their breeding programmes and genetics technologies and, obviously, as a veterinarian, she would like to see their animal health solutions coming closer to market. More generally, she hopes Roslin Technologies will be seen as a leader of innovation in the agtech sector and a company that takes this responsibility seriously.


The Big Interview was conducted by and originally published in The Scotsman on 29th November.