Have you caught the bug for eating insects?

To most people, they may not provide the most appetising of meals, yet insects have been at the centre of many people’s culinary world for centuries.

Article published in The Scotsman. 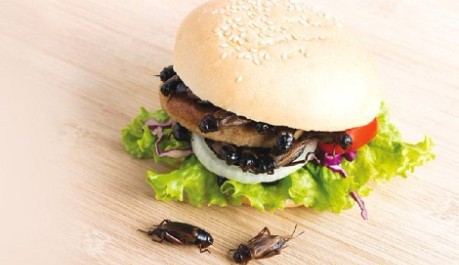 As the global population is expected to swell to more than 9 billion by 2030, according to the United Nations’ Food and Agriculture Organisation, experts are pioneering innovative ways to meet that demand in sustainable ways.

Beta Bugs, an SME based at Roslin Innovation Centre, has accelerated the evolution of the Omega-3-rich black soldier fly (BSF) for use as animal and fish feed.


Plant-based “meat” and dairy alternatives are taking off across the UK, but from the supply chain to the supermarket shelf, food and drink experts have caught the entomophagy bug.

A recent report by Meticulous Market Research found the insect protein market could be worth nearly Ł6.5 billion by 2030 and named a growing population, demand for protein-rich food and decreasing resources as reasons for that value.

Crickets were the most popular of these ingredients last year and they are expected to continue to dominate the market, says the report, due to a high nutritional value, easy farming and processing, as well as increasing use in recipes and products.

Those that have been roasted and immersed in the smoky-sweet flavours of barbecue and zingy chilli and lime, produced by London-based Eat Grub, have been a hit in the UK market – a sign, perhaps, of Britain’s changing attitudes towards people eating creepy-crawlies.

Eat Grub secured a deal to sell its snacks in 250 Sainsbury’s stores across the UK at the end of last year and has since obtained its biggest order yet, with Lidl stocking the snacks at 3,200 of its stores in Germany.

The company, which bills its products as the original superfood and aims to revolutionise Western food attitudes, was established in 2014 by friends Shami Radia and Neil Whippey. Along with chef Sebby Holmes, of London-based Thai restaurant, Farang, they began with a series of pop-ups and cricket powder energy bars.

"There are over 2,000 species of insects you can eat, but we find that crickets, buffalo worms, grass-hoppers and meal worms are the most palatable for the Western culture."

The crickets, which Reid compares to prawns and claims have a mild nutty flavour, are imported from Holland and Thailand before being freeze-dried and roasted.

Highlighting their sustainability, Reid claims that to create 1 kilogram of beef it takes 20,000 litres of water, but to create 1 kg of cricket protein, just one litre of water is required.

The farming of crickets can also be done vertically, addressing the issue of reducing land availability.

"With regular articles about climate change and documentaries such as BBC’s Planet Earth and environmental issues, people are becoming more aware and more mindful about the topic. People are willing to try new things and everyone seems to realise that we now need to be innovative in the way we eat."

David Keats, owner of Brander Lodge Hotel in Oban, who hit the headlines in the summer of 2018 with his midge-coated burger, shares this opinion.

"It is time that people opened their eyes and did a little bit of homework themselves and see that for centuries insects have been eaten by humans. Nowadays there is insect farming for this purpose – as it is protein – and when they’re cooked they’re fit for human consumption."

"When you get your mind around it, it is no different to wild game or the various types of seafood and livestock that humans have eaten for centuries."

It followed on from a tongue-in-cheek social media post to inform guests that his team was endeavouring to keep the teeming West Coast midge population under control by allowing guests to “bite back”.

Only the females bite as they need blood to produce their eggs, so Keats set up four Mosquito Magnet traps designed to attract these insects, filling a ten-litre tub. He froze the bugs, which were originally to be made into fat balls with seeds for birds – and this is when the idea for the “Midge Burger” came about.

"If people would think about it, insects are eaten by birds and we eat birds and we don’t have any qualms about it. Brits eat offal from an animal in every description whereas other cultures wouldn’t eat that. It is just a cultural thing."

Local health inspectors were quick to find the midges – adding a tasteless but rich protein – fit for human consumption before the burgers became available upon request.

"I think [entomophagy] might catch on eventually, but it is just getting the attitude changed as to what people are used to and prepared to eat."

Those attitudes do appear to be changing. A study by Barclays published in June states that Generation Z – the demographic born between 1995 and 2010 – is more health and environmentally aware than their predecessors, the Millennials, meaning that the younger consumers are less likely to simply dismiss insects as a foodstuff on account of the of the “yuck factor”.

The report compares insects to sushi, claiming it was once deemed a “wacky” food but – thanks to high-end eateries – had been transformed into a mainstream food choice.

Although the idea of insect consumption becoming mainstream might not occur for some time yet, if possibly in the near future, there is strong movement towards using insects in the supply chain as an alternative to animal and fish feed – and Zero Waste Scotland says that the country could become a European leader in insect farming.

Scotland currently has no insect farms, but the UNs’ Food and Agriculture Organisation has been promoting insect protein as a sustainable alternative source of feed for animals and fish since 2003.

Beta Bugs, an SME based at Roslin Innovation Centre, has accelerated the evolution of the Omega-3-rich black soldier fly (BSF) for use as animal and fish feed.

It was set up in October 2017 by Dr Thomas Farrugia – a Royal Society of Edinburgh Unlocking Ambition Enterprise Fellow – to transform the way the world’s population is fed and supplied, addressing his concerns that the EU will be short of 60 million tonnes of protein by 2030.

Together with Dr Gregor Gorjanc, a quantitative geneticist and animal scientist also based at Roslin Innovation Centre, he is innovating a catalogue of new breeds of commercially farmed insects, via biotech and classic breeding techniques, for use as feed.

BetaBugs and Roslin Innovation Centre recently received a Ł500,000 Innovate UK grant to develop the quantitative genetics, infrastructure and breeding of BSF to create a higher performance insect for the industry.

"The bugs that are used today are pretty much like wild strains. They haven’t been genetically improved at all – and I am not talking about GMOs, just classic breeding supported by data."

"We will identify the best individuals and use them as parents of the next generation and with that improve their overall performance as has been done with cattle, pigs, poultry, salmon and so on."

He also points to the poultry sector as having improved efficiency in converting feed into protein by 64 per cent over 63 years, and claims that the insect industry could achieve similar in just eight years.

"We are breaking new ground here. Breeding is the missing link that this rapidly growing industry will need to achieve economies of scale. We are also tailoring our breeds to different market needs, such as an Omega-3 rich BSF for the fish feed sector, to make sure that users of insect protein reap the benefits."

He highlights the insects-for-feed market, which is estimated to be worth Ł2bn by 2029. French-based Ynsect, received the European Commission’s first ever large investment into an insect farming start-up earlier this year with a €20 million boost.

With the support of Zero Waste Scotland and Scottish Enterprise generating investment for the growing industry, Beta Bugs is sure Scotland stands to be a key player in adopting insect protein to revolutionise and strengthen its food and drink sector.

"Scotland has the largest agriculture business in the UK and you have the salmon aquaculture. Both stand to benefit from Scottish-produced insect protein."

"The University of Edinburgh is a world leader in designing breeding programmes and modern quantitative genetics. For us, this is really an interesting partnership because it is something new and that has immense potential to grow.”

This article first appeared in The Scotsman’s Food and Drink 2019 supplement.